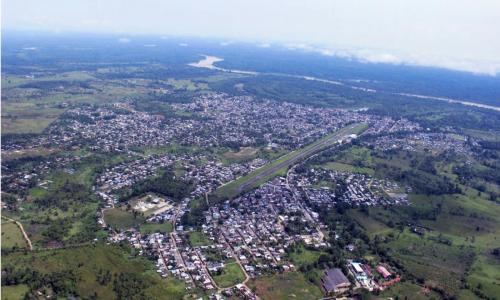 Puerto Asís is a Colombian municipality located in the department of Putumayo. It is located on the left bank of the river Putumayo, below the mouth of the river Guamuez, 88 km. By road south of Mocoa (capital of the Department).

They cross the city from south to north, two pipes and a ravine (Puente Roto, Obrero and Singuiyá). The temperature oscillates between 27 and 31 degrees. In hot weather the thermometer reaches 37 degrees.It also has the 3 de Mayo Airport with a length of 1.7 km, from where you can travel to Cali, Bogota, Medellin, Ipiales, Pasto, Florence, Neiva and Puerto Leguizamo.In addition, it is a terrestrial or fluvial route to Ecuador, Orito, La Antiga, Mocoa, Leguízamo, Amazonas, Ecuador, Peru and Brazil.

It was founded on May 3, 1912 by the religious Capuchin missionaries, Father Estanislao de Les Corts and brother Ildefonso de Tulcán. The population took the name of the patria of San Francisco (Italy), and like spiritual father to the saint of Assisi.

In the primary sector of the economy, agricultural activities are carried out, among them the cultivation of traditional and fruit products such as banana, cassava, maize, rice, cane, chontaduro, pineapple and palmito.

Livestock activities are basically related to the breeding of cattle, for 2005 it reported a population of 32,380 heads of cattle established in 11,600 hectares. (4,600 animals), poultry (66,000 animals) and fish farming