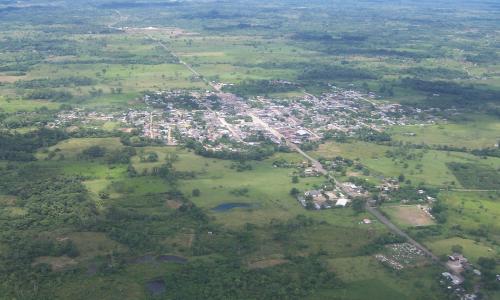 San Miguel is a municipality of Colombia, its municipal head is La Dorada, located to the southwest of the department of Putumayo, in the border with Ecuador, with which limits to the south. To the north and west it borders with Guamuez Valley and to the east with Puerto Asís. The municipality was created in 1994.

The municipality of San Miguel is crossed by the rivers San Miguel, La Guisia, the gullies Dorada and La Hormiga, among otors small streams. The flora are native species of the Amazon region, which constitute what is called Hylea Amazonica. Among these species are commercial timbers that have been decimating such as cedar, sandstone, granadillo, barbasco, yellow cumin, squap, among others. Also they have species of plants that have been naturalized, such as, grasses that predominate in the prairies. In relation to the fauna, there are also extinct species such as tigrillo, tapir, guagua (Agouti paca), deer, armadillo and guara.

It stands out its oil exploitation, with several deposits, the ACAE wells that flow to the Columbus battery by the hydraulic pumping system and natural sense. Other economic activities are focused on agriculture (maize, rice, cassava, rubber, banana, chontaduro) in addition to small-scale livestock, the exploitation of forest products and timber of different species.