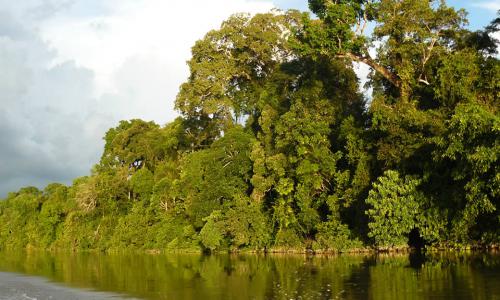 The charm of the Amazon rainforest is reflected in this natural park, rivers, basins, trees over 40 meters high and rich floristic, make under this jungle environment inhabit great diversity of animal species.

The tourist can find some of the most important rivers in the country, the Caquetá, the Cahuinarí and the Pamá. Variety of soil types, geological formations, tropical humid climate, piranha breeding sites, black caimans 10 meters long, and charapas a true adventure through the Amazon.

In La Pedrera and Araracuara, tourists can get accommodation in the homes of the residents of the region.

Location
It was created in October 1986 and is located in the department of Amazonas, within the jurisdiction of the municipality of Puerto Santander.

Flora
You can see trees over 40 meters high, table roots and a large presence of epiphytes and parasites, a large number of palms such as: canangucha, guasay, chonta and others. Also in this place we find red and white cedar, caobos, sangretoro, uvos and uvillas, capirón, among others.

Fauna
Within the representative fauna are the piranhas, babillas, anacondas, boas, tapirs, red deer, mico churuco, tigrillo, jaguar, the largest freshwater turtle in the world, the black alligator, among others. In addition you can see a variety of birds, of which the macaws or parrots, parrots and pavonoes stand out.

Attractions
• Pre-Hispanic Petroglyphs: Of particular interest in the park area are the pre-Hispanic petroglyphs along the course of the Caquetá River; those found in the Tijereto stream, the Miringuao scree, the Regadera stream and the Gago stream, which are a testimony of the rock art in the Colombian Amazon, are noteworthy.

The Caquetá River acts as guardian of this treasure, covering it during most of the year; only in the month of February, when it reaches its lowest flow, it allows observing these figures.
For the Miranas Indians, these symbols have an exact meaning and convey an extensive mythology associated with ancient rites.

Today these groups live in small hamlets along the Caquetá River and despite having suffered the ravages of Western society, they still preserve much of their cultural traditions and respect for the jungle.

Tourist activities
• Observation of Black Caiman: This precise activity of a connoisseur of the jungle, requires a silent boat, a lamp, and much courage, without fear. The plan is to navigate at night, looking for very red red eyes. When a pair of these is discovered, it is dazzled in such a way that the reptile can not look the other way while the villager throws himself and grabs him by the neck. The idea is to touch it, to caress it, to know it and then it is thrown into the water to continue its path.

• Ceramic Bora indigenous community - Miraña: Located in the Amazon in the buffer zone of the Cahuinarí Park. Its pieces defined by shape and color. They are molded in blue mud (nu-paki), soaked in the shell of Katsujae and Katsuja, then dried in the sun, burned and shone for 20 days with Rio stone, finally painted with white ragweed and white clay where millenary figures take form of elements that predominate on earth.

• Routes: Visit to the El Sol creek, where there are waterfalls, as well as small natural pools. Tours of the Cahuinari, Bernardo and Caquetá rivers, where you can see different plant formations and fauna.

• Trails of the jungle: You can take guided walks with the Ticunas of the region through the jungle and observe the different animal species that live there.