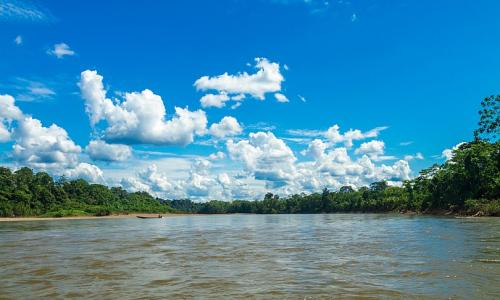 The park is located in one of the most diverse wildlife areas in the world and has a wide variety of lakes and navigable lagoons with different types of plants, aquatic insects, birds and impressive river mammals. The vegetation corresponds to Tropical Humid Forest and has not been altered significantly by human action. The plant formations present a great diversity, not only in terms of the forest structure and its floristic composition, but also in terms of the phenological behavior of the different species throughout the year (FBPR, 1986). This translates into a diversified supply of food, at a spatial and temporal level, to which the existing fauna is adjusted.

A large number of species are found in the Park, many of them have not yet been reported. The species are known to a large extent for the use that people make of the communities, especially for their consumption, which has been proven by the Park's officials (both by direct observation and by their identification in different guides) and can be Classify according to the following groups:

The main species of the Cahuinarí National Natural Park is undoubtedly the charapa turtle (Podocnemis expansa), which was the biological basis for the creation of the park. The charapa, the largest freshwater chelonian from America and perhaps the world, was subjected to a high commercial exploitation of more than one hundred years, which led to it is currently in danger of extinction. The species, which historically served as a source of protein and pillar in the worldview for the indigenous peoples present in its distribution area, became another resource to be exploited by Brazilian and Colombian merchants who took advantage of its meat to such extent and their eggs, that the populations previously abundant in the basins of the Orinoco and Amazonas rivers (places of original distribution of the species) only find continuity in structured populations in the Trombetas rivers (Brazil) and in the middle and lower Caquetá river (Colombia ), including the hydrographic basin of one of its main tributaries: the Cahuinarí River.

The Paya National Natural Park has an exceptional plant richness typical of the Colombian Amazon, present in the different types of forests that make up its ecosystems. In the protected area there is presence of tall and well developed forests, as well as combinations of low forest with dense undergrowth and high forest with little presence of palms. The plant species that are considered more important because of their degree of threat or vulnerability, in addition to their importance as an offer of wood, food, medicine or raw materials for handicrafts used by the indigenous peoples that inhabit the protected area are: the palmito (Euterpe oleracea ), the asaí (Euterpe precatoria), canagucha (Mauritia flexuosa), chambira (Astrocaryum chambira), milpesos (Oenocarpus bataua), the caimarona (Maclenia rupestris), the macoubea (Macouvea guianensis), the icaco (Chrysobalanus icaco), the platonia (Platonia insignes), the noli (Elaeis oleifera) and the arazá (Eugenia stipitata), the cedar (Cedrela sp.) and the granadillo (Platymiscium sculatum), ceiba (Ceiba pentandra), Hachapo (Pithecellobium cateniformis), Tara (Simaoruba) glauca)