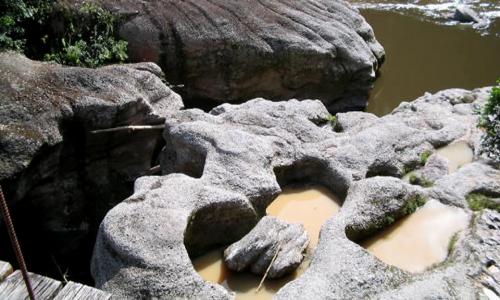 The Serranía de los Churumbelos National Park, Auka Wasi, is a public protected area of ​​the National Natural Parks System of Colombia declared by resolution 1311 of 2007. It has an extension of approximately 97,189.6 hectares, a wide altitudinal gradient that ranges from the 400 to the 3000 msnm. Due to its great diversity of birds it was designated as AICA 66. It is located southwest of Colombia, in the jurisdiction of: Santa Rosa (Cauca) 51.9%; Piedmont 38.3%; Mocoa 4.5%; San José de Fragua 1.5%; Acevedo 1.0%

The park is located approximately 1 ° 11 'North and 76 ° 24' West, in the territory of the departments of Cauca - Caquetá - Putumayo - Huila, in the jurisdiction of the municipalities of San José del Fragua (Caquetá), Santa Rosa and Piedmont (Cauca), Palestine and Acevedo (Huila) and Mocoa (Putumayo).

In the PNUA SCHUAW there is a great diversity of plants reported, more than 825 different species. The high diversity of species could be due to the fact that the Serrania is located geographically in a detachment from the interconfluence zone of the northern Andes, which is considered one of the most diverse areas. Since the Serrania receives influence from the Amazon on the part of the Putumayo River plain, there are components of diversity, structure and composition typical of the lowland forests of the Amazon.

The large number of species of butterflies and insects found in the area give a convincing proof of the conservation status of the area, which ratifies the Serranía de los Churumbelos Natural Park, Auka-Wasi, as an important enclave for conservation. a good part of the species found there are at least rare, endemic and underrepresented in reference collections. The species collected reveal the pristine nature of the forests in the area. The recognized role of butterflies and coprophagous beetles as indicators of the state of conservation, diversity, endemism and degree of intervention of a biota, is an important tool in the conservation of slightly disturbed habitats such as the Serranía de los Churumbelos in the department of the Cauca.