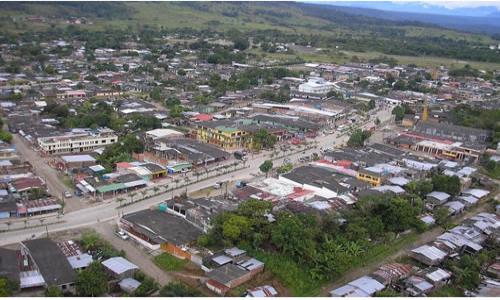 Orito is a Colombian municipality located in the department of Putumayo. Orito grew up around the oil exploration camps in the Amazon foothills since 1963. Population growth accelerated due to the high migration of people from the rest of Colombia attracted by oil exploitation. In 1978 Orito was declared a municipality.

The exploitation of oil and coca crops, acquired by groups outside the law, are the basis of the municipality's economy, followed by banana, cassava, maize, potato and sugar cane farming. Forests in Piedmontese forests are exploited for export. There is an incipient cattle raising oriented to the production of milk and meat for the local consumption. Initially the main park was located in front of E.S.E. ORITO HOSPITAL but with the passage of time this center moved through the same building as here the new central park.

The municipality of Orito has a great variety of tourist sites, among the most outstanding are; Extreme sports such as paragliding, rivers, streams to enjoy a spectacular day of Sancocho next to the river and a natural bath in crystal clear waters, MTB crosses are real in the jungles of Orito, spiritual journey Yage, river Quebradón, Sanctuary Ingi Ande, the river Orito, the Pijilí stone, among many more attractives.