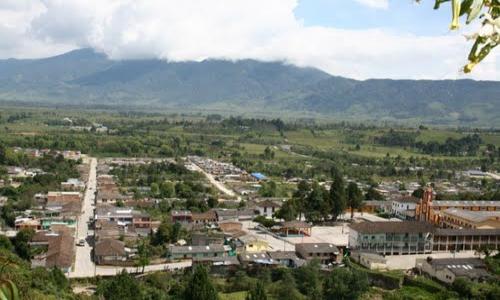 Santiago is a municipality of Colombia, located in the south of the country, in the department of Putumayo.

The Geographical Area of ​​the Municipality of Santiago is of special importance in the national and regional context, since it establishes several thermal floors, giving it the opportunity to have a varied vegetation, fauna, different forms of relief, great water wealth and the settlement of Human groups, that make of Santiago an important Municipality in the Upper Putumayo.

The main economic area of ​​the municipality is the dairy farming, producing approximately 8,000 liters of milk per day, which is mostly sold in the departments of Quindio and Valle. The predominant race is the Holstein Mestiza obtaining average productions of 5.0 liter per cow per day. 90% of the area uses the type of extensive cattle ranching with dual purpose although it is a specialized breed for milk. The agriculture is represented in greater proportion by the cultivation of the bean that has had much boom in the last years, obtaining more than 3000 kilos per hectare. Maize is the traditional cultivation of the Indians, being used its cane as tutor of the cultivation of bean